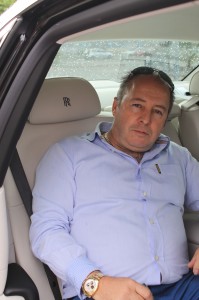 Glenn Armstrong is in his early fifties and a property multi millionaire. He has over 60 development projects running throughout the UK at any one time.

These range from simple ‘buy, do-up and sell’ projects through ‘buy and build in the garden’ projects; ‘buy and split into flats’ projects to full-on ‘buy the land and build property’ projects.

Over the past ten years Glenn has educated himself and has learned all the best methods of teaching. So in Glenn you get a unique combination of highly experienced Property investor and developer who loves to teach.

He really does walk the walk and talk the talk.

Glenn has gone on to share his knowledge and the methodology of his success with would-be investors in the UK and abroad so that they too can achieve their dream of becoming truly financially free.

Over 60 of Glenn’s mentees are now equity millionaires in their own right and hundreds more have gone on to be financially free and full time investors.

Glenn Armstrong’s story is not one of instant success, but of learning in the school of hard knocks.

Very early in life, Armstrong discovered that there are better ways to make money than a job working for others.

Whilst studying mechanical engineering at Milton Keynes College, back in the early days of VCR’s and videotapes, Armstrong started to augment his meagre wages, as a draughtsman with Marconi, by lugging a large suitcase full of videotapes door-to-door in Milton Keynes. He rented out the videotapes overnight picking them up the next day.

Soon realising that a lot of his potential customers didn’t yet own a very expensive (In those days) VCR machine Armstrong invested in several and started renting those out overnight too! It wasn’t long before he packed in his job with Marconi!

So successful did this operation become that eventually it made sense to open a videotape hire shop. One shop ‘Wunday Videos’ led to another and another; until eventually, Armstrong owned 13 shops and had begun franchising out the Wunday Video brand.

By now, videotape hire was becoming mainstream and Armstrong received a number of offers from the growing video-hire chains including Blockbuster. In 1980 Armstrong sold out for £1.5 million to a Blockbuster competitor; the then rapidly growing Videostore plc (part of Binatone). Passionate about cars, to celebrate, Glenn swapped his old Avenger for a Lotus.

Unfortunately, most of Armstrong’s payout had been in Videostore plc shares - which he couldn’t sell inside 18 months. And before he could cash any of them Videostore plc went bust taking with it Glenn’s entire paper fortune.

With no income and a wife and child to support, Armstrong took to driving a taxi around Milton Keynes. He worked incredibly long hours driving the taxi to not only pay for food and a roof over their heads. However, ever the entrepreneur, soon his efforts allowed him to buy a second taxi.

With a second taxi bringing in money, he carried on working just as hard until he could afford a third then a fourth.

Starting taxi driving had been an emergency measure to get food on the table and somewhere to live. But once these basic needs were in hand, Armstrong’s motivation to work ridiculous hours (often 100 hours a week) all came down to a question he’d asked a Ferrari garage owner some years before.

Knowing full-well that he was never going to be an IT specialist, Armstrong decided that property investment would be the only way he’d ever get his Ferrari – especially after having been so close to being able to afford one before the crash of his Videostore plc shares.

But he also knew that to invest in property he needed capital and building up the taxi fleet was a way to do that.

Eventually, after three years Armstrong had built the fleet to 30 taxis and was making £3,000 a week. He now turned his attention to the brand new market of computer games first doing mail order and eventually becoming a distributor to other retailers. This seemed to be a massive business opportunity and soon outstripped the taxi fleet which he sold off. After three years the computer games business was turning over £12million a year.

But then along came big bad Tesco and decided to use its might to take the computer games market off the smaller guys and have all the profits for themselves. A familiar tale I’m sue you’ll agree, Glenn’s buoyant business soon slowed down to a crawl and eventually there was nothing else to do but admit defeat and give it up.

Glenn decided that the time had come to stop following emerging market fads and find a business that was solid and would stand the test of time.

This was now 2004 and recalling that property investors drove his beloved Ferrari’s and observing that fifty per cent of the Rich List made their millions through property (and the other fifty per cent kept their capital in property) Armstrong decided it was time to try his hand in this long established market.

He started buying properties to rent out (now called buy-to-let). However, after buying six properties, his capital of circa £120k was all tied up in deposits and it was looking as though thoughts of building a large property portfolio might be thwarted.

But strongly believing that where there’s a will there’s a way, Armstrong set about studying the property market, the legal framework and the mortgage market and came to discover that there were much more advanced strategies that could be employed to buy properties. Fully legal strategies, acceptable to the mortgage lenders, which required far less capital per property. (Armstrong points out to his property students, of whom more later in this article, that the legal and mortgage landscape was of course very different to that in our current times of austerity, such techniques would not work today).

With his creative investment strategies, Armstrong figured that if he worked at it really hard he ought to be able to buy one property a week. So he set himself the target of buying 52 properties in 52 weeks, a target that, in fact, he achieved in just 48 weeks. “So I gave myself the rest of the year off,” he quips! Adding that there were in fact only four weeks of the year left.

With his family’s future now secured, Armstrong could have sat back and simply lived on the rental income, but that is not the measure of the man.

As he happily confesses, he’d got the property bug and states that he wouldn’t have believed it possible to have so much fun and earn money at the same time. A claim he still makes today.

“Property has never once felt like work,” Armstrong says,” and it’s highly intellectually challenging too, with lots of time spent constructing finance deals and consulting accountants and barristers to make sure we’re always on the right side of the very complex laws relating to properly and finance.”

The love of teaching

Along the way, Armstrong also studied NLP (neuro linguistic programming) – the basis of highly effective communication and training. He discovered that he really loved teaching. Combining the love of property with the newly discovered enjoyment of teaching, he started to teach people the property strategies that were working for him.

Many years of teaching later and Armstrong is still very much a full-time property investor with teaching as a combination of hobby and side-line.” The vast majority of my income comes from the property portfolio and my property development business,” Armstrong confirms, ”with just a couple of per cent coming from the various training courses and the mentorship programs that I run. I teach to help people enter this fantastic business – and to help them avoid some of its many pitfalls and minefields.”

In a vast change from the taxi-driving days and as a self-confessed car obsessive, he finally got that Ferrari he’d wanted for so long, a model 430 in 2007.

Armstrong is rightly proud of the fact that he now has over 65 past students who have become property millionaires in their own right and all of whom are happy to attest that their success is as a direct result of his teaching and mentorship.

“I intend to help many more achieve millionaire success,” says Armstrong, ”because I firmly believe that its so much easier and less risky for others with the help and advice of someone who’s done it already.”

“And because I get a real buzz from helping my students achieve their own success.”

In 2014, to celebrate ten years in the property game and having the stability from adopting a prudent low-gearing approach which leaves his portfolio well protected against interest rate rises, he decided that it was now time to start building his car collection. So, in 2014, he’s changed his Ferrari to a 458 and has added a Rolls-Royce Ghost to his collection.

“Some people call this ostentatious,” Armstrong muses, “but none of them are brand-new and for me it’s a lifelong dream to own these cars. And, quite frankly, I think success deserves a reward!

“I always teach my students not to spend money on cars until they are financially-free. From then on, you just work out how many extra BTL properties you need to fund the car of your dreams.”

At 55, Armstrong has by no means finished his property career. Instead, he is continuing to grow the business by entering into joint ventures with many of his most successful students.

As Armstrong explains,” access to capital can often hold property investors back, but with my track record I now have banks and private investor groups anxious to invest in our projects. For those students who graduate through to my partnership program, they get access to my sources of funding for their projects. They also get me as an active partner, inspecting every property and analysing the financials - to ensure that the project will be successful and make a profit.

“The lenders know that with me involved, each project will be a low-risk investment. My student-partners and I share the profit on our joint projects: from their point of view sharing the rewards on a project that’s going to definitely turn a profit is a far better scenario than having 100% of the risk of failure.”

“Neither my students nor joint venture partners are tied-in so, as they get more skilled, they do simpler projects on their own. But they come back to Uncle Glenn for help with the more complex and ambitious schemes. Even multimillionaires, solicitors and accountants come to me to help them on their more advanced projects.”